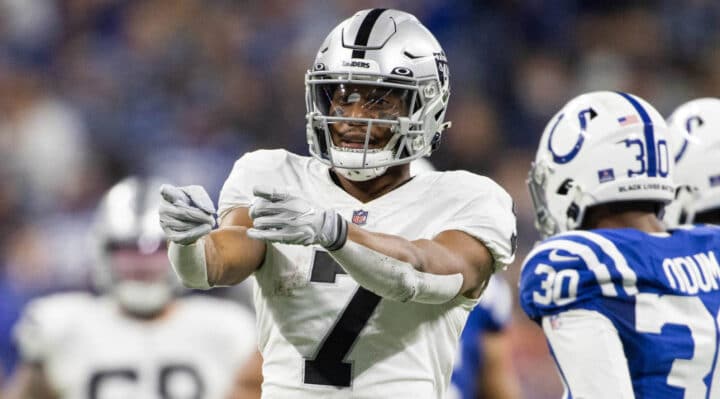 With the regular season for the NFL over, gamblers and Vegas will be looking at NFL odds for the playoff games in the NFL. With six games to bet on over three days, there will be plenty of time to get in a bet on one or more of these games for people. These bets will be available on the playoff games, money line bets, point spread bets, over/under bets, props bets, and parlay bets. with all the betting options available, one may wonder what opportunities they can have with wagers on the NFL playoffs. The NFL playoffs always offer gamblers and fans excited, but will the first week of the NFL wild card weekend offers be like the rollercoaster ending to the NFL’s regular season?

After clinching their playoff spot in an overtime thriller against the Los Angeles Chargers, the Raiders are coming into Cincinnati as an underdog. The Bengals have some offensive stars that sat out the last game of the NFL season to get much-needed rest. With the Bengals favorite by less than a touchdown, what could someone look for with betting on this game?

The game will be the second meeting between the two teams this season. The teams played the previous game in Las Vegas, where the Bengals won by 32-13. The game would be close in the first half, but the Bengals would light up the scoreboard in the fourth quarter, scoring 19 points.

The Raiders have a history of poor second-half performances, which is why their last game went into overtime. If the Raiders can’t take a big lead early in the game, look for Joe Burrow and the Bengals offense to cover the point spread.

This game will be the third meeting between these two teams. They split the series during the regular season, with the away team winning each game. New England won in Buffalo by four points. In the rematch, the Bills would blow out the Patriots 31-14. Can they avenge their home loss during the regular season against Belichick and the Patriots with the Bills as favorites by less than a touchdown?

The Bills have the edge with a string of wins coming into this game and no notable players out for the game. The Patriots are coming off a loss to the Dolphins and have been unreliable against teams over .500 lately. They also have some starting players that are out due to injury. This gives the Bills a chance to repeat their win from the last game the two played.

This game will be a rematch of the week six matchup that the Buccaneers won in Philadelphia by six points. The Buccaneers will be without critical players from their week six game. The Eagles are 7-4 since that week six loss to the Buccaneers and have a shot at upsetting the Buccaneers. With the Buccaneers’ favorite by more than a touchdown, the Eagles have a chance to cover that spread.

After an upset victory in overtime to make the playoffs, the 49ers head to Dallas, looking for another upset win. The Cowboys have been the best team in football for spread betting, going 13-4 for the season. However, the Cowboys are 5-4 against teams over .500 and are only around a field goal favorite for this game. With the 49ers winning in week 18, they could be the upset pick again on the moneyline.

In another rematch from week 16 in the NFL season, the Steelers will look to give Ben Roethlisberger one more game before he retires from the NFL. The Chiefs will be looking to repeat their 36-10 win over the Steelers, where Patrick Mahomes passed for 258 yards and three touchdowns. But with the Chiefs as nearly two-touchdown favorites, taking them might be a hard pill to swallow.

Both of these teams blew leads in week 18, meaning neither team has momentum here. This is their third matchup, with each team having a win apiece. The Cardinals are beat up on both offense and defense, while the Rams just haven’t been playing smart football. With the Rams as the favorite by less than a touchdown, the spread favors them at home.

Also, Read: 5 Ways to Improve the Performance of a Soccer Team